Ryan J. Bell is Adjunct Professor in the Doctor of Ministry program at Fuller Theological Seminary and the Global Studies Department at Azusa Pacific University. He has written numerous articles, contributed to several books—most
recently, Manifest: Our Call to Faithful Creativity—is a regular contributor at The Huffington Post and is the Co-Founder and Editor-in-Chief of The Hillhurst Review. 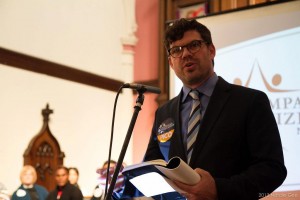 Ryan is a sought after commentator, panelist and pubic speaker on issues at the intersection of religion, faith and public life. He serves on several interfaith organizations—including The Guibord Center: Religion Inside Out and the Abrahamic Faiths Peacemaking Initiative and LA Voice, a member of the PICO National Network.

For the past 19 years Ryan has served as a pastor, most recently as the senior pastor of the Hollywood Seventh-day Adventist Church, since June 2005. He received his Master of Divinity degree from Andrews University in Berrien Springs, Michigan and a Doctor of Ministry in Missional Leadership from Fuller Theological Seminary in Pasadena, California. Ryan and his family live in Los Angeles.